The Farmer
& the Data:

How Wireless Technology
is Transforming Water
Use in Agriculture

Since the turn of the century, Americans’ access and use of wireless technology has increased rapidly. Over the past ten years, wireless has transformed our society and industries across the economy.1 In 2015, 98 percent of Americans were able to receive 4G wireless coverage,2 and mobile data traffic grew by more than half.3 It’s no surprise that farmers are also turning to wireless technologies.

Agriculture is a critical component of the U.S. economy – both in terms of output and in terms of natural resource use. The agricultural sector, however, accounts for a disproportionate share of U.S. natural resource use. In 2013, U.S. farms contributed $166.9 billion to the U.S. gross domestic product (“GDP”), or about one percent of total GDP, and supported many other industries – such as food service and food manufacturing.4 In contrast, over half of U.S. land is categorized as agricultural land and agriculture accounts for roughly 80 percent of the U.S.’s total consumptive water use.5 Despite agriculture’s heavy reliance on water less than 10 percent of irrigated farms in the U.S. used advanced irrigation management techniques, such as those using wireless technology.6 Thus wireless technology has the potential to not only help farmers more efficiently manage water use, but to also add substantial value to the agricultural industry. This paper highlights the ways in which wireless technology can be used to more efficiently manage water use in U.S. agricultural production as well as the degree to which these technologies are yet to be adopted by U.S. farmers.

Between 2005 and 2013, wireless technology as a primary method of internet access grew by more than 950 percent across U.S. farms.

The benefits of the adoption and use of wireless technology in U.S. agricultural production are large. Farming is an inherently risky business; farmers must deal with natural disasters, unpredictable variations in rain, and wide fluctuations in the price of commodities.11 Wireless technology can help mitigate these risks by providing farmers real-time access to weather and market conditions. Indeed, in 2007, researchers claimed new wireless agricultural technologies “show so much promise...that during the coming decade, wireless networks will offer the same type of quantum leap forward for farming that GPS provided during the past decade.”12

That prediction is coming true. Today, farmers can use local wireless networks to access real-time information on the current conditions of their fields and the status and location of their equipment. Farmers can also use 3G and 4G networks on their smartphones or tablets to access real-time information on agricultural markets and their own farms remotely. 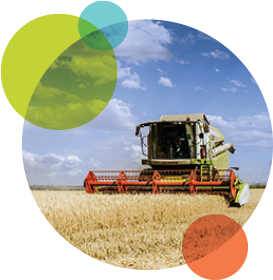 Wireless technologies are also helping solve two water-related challenges for farmers: scarcity and environmental impacts. Over the last few decades, water has become increasingly scarce, especially in Western states.13 In the next ten years, 40 out of 50 states expect to have some type of water shortage.14 As water becomes increasingly scarce farmers’ irrigation costs are likely to rise – cutting into farmers’ profits and the economic vitality of the agricultural industry.

Agricultural water use also has significant negative externalities on the local environment. Over-watering of crops causes nutrient runoff which can lead to “dead zones” in the world’s oceans.15 Second, the diversion of water for agricultural use can threaten environmentally sensitive areas and ecosystems.16

This report was prepared for the CTIA Wireless FoundationTM. All results and any errors are the responsibility of the authors and do not represent the opinion of The Brattle Group or its clients. Acknowledgement: We acknowledge the valuable contributions of many individuals to this report and to the underlying analysis, including members of The Brattle Group for peer review. Specifically, we are indebted for contributions from Sam Newell, Chris McCaffrey, Laurie Sellars, and Zach Wulderk.